I have many people to thank in reaching all 50 states.  To my parents who drove me to about 23 states before I could drive and for all that raising me stuff and for bringing me into the world in Pennsylvania, #1.  To all the kind people (and a few of the weird ones) who picked me up while hitch-hiking.  To Mark who picked me up in Missoula, Montanna and let me ride with him all the way to Michigan.  To my parents who had me drop the family off at the airport in NYC, one summer, and take a train to California to save a few bucks.   I think that inherited Rathmell desire to be cheap is what lead me to hitch-hiking in the first place.  To all the friends that let me crash at their place along the way.  To Randy who invested in my life and gave me the NIV pocket NT that traveled with me to at least 30 states.  To Joel who accompanied me to South Dakota, #49 (he'd would have stayed with me until 50 if I would have let him).   To Christie & Kris Minnich for feeding me my only meal in Louisianna, #48.  To Jon, for the tickets to get to Alaska, #50.  To Jen, for letting us spend our 1 year anniversary in Rhode Island, #45 and for accompanying me to Alaska, #50.  I always thought it would be cool to get to all 50 states but like so many things in life it's the journey to the goal that is often better than attaining the goal.  I have countless great memories that will last a lifetime.  In reaching this goal I am reminded of  words of Solomon in Ecclesiastes12:13 "Now all has been heard; here is the conclusion of the matter:  Fear God and keep his commandments, for this is the whole of man."  Solomon tried everything to gain happiness, amassing wealth, wine, women, taking on building projects, ect but he realized in the end that Fearing God was what mattered.  In the end it won't matter if you have spent your entire life within an hour of Scranton, PA or if you have traveled the world if you don't fear God.  The whole duty of man is to fear God.  Do you?

At the tender age of 25, my husband has reached his goal of getting to all fifty states.  Thanks to my brothers generosity in offering us very cheap stand-by tickets, we were able to fly up to Alaska from Seattle and reach a lifetime achievement for Buddy.  We only stayed for one day...my brother said we'd probably be stuck in Alaska for the winter if we didn't leave the next day because everyone and their brother is trying to leave Alaska these days...something about cold winters. 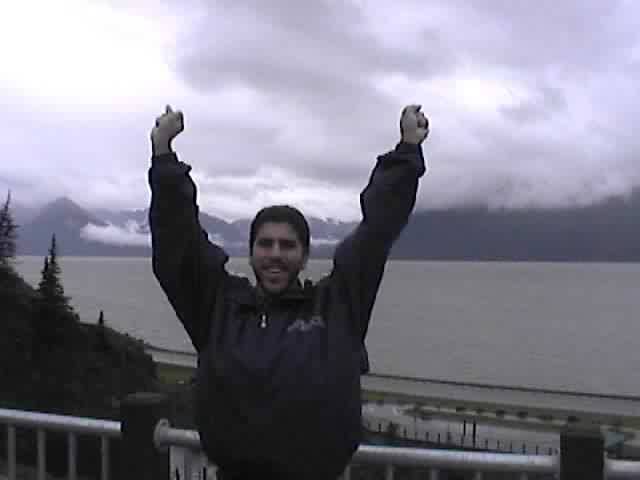 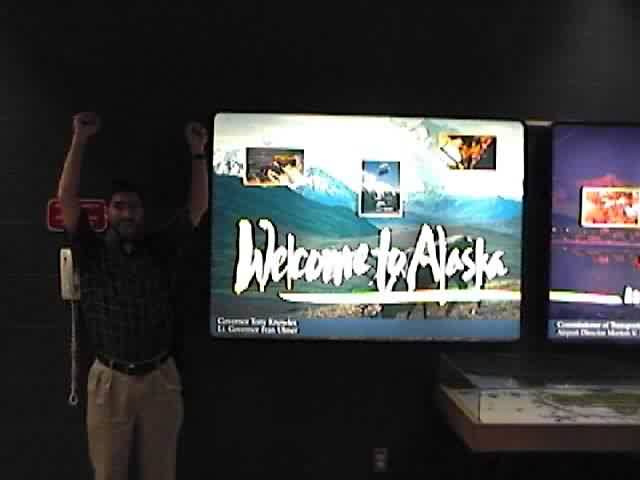 We arrived at midnight and found a hotel room for what was left of the night.  The Anchorage Airport is hopping at midnight because a lot of flights go out that late, so that they can make connecting flights with the rest of the world.  We ended up sleeping for most of the three hour flight, but we did get to see a little bit of a show from the Northern Lights (aurora borialis) on the plane....very cool. 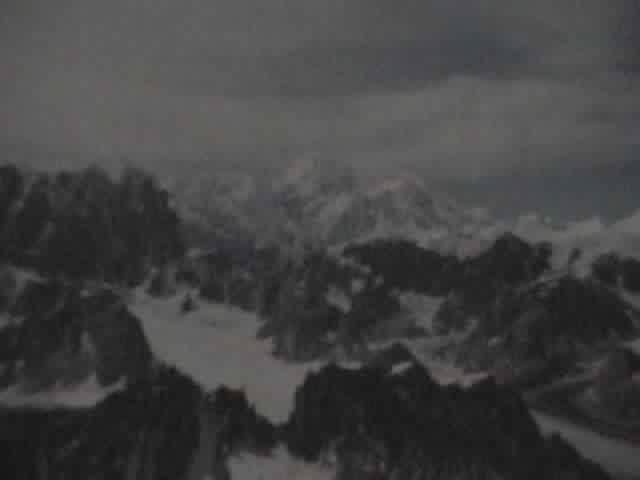 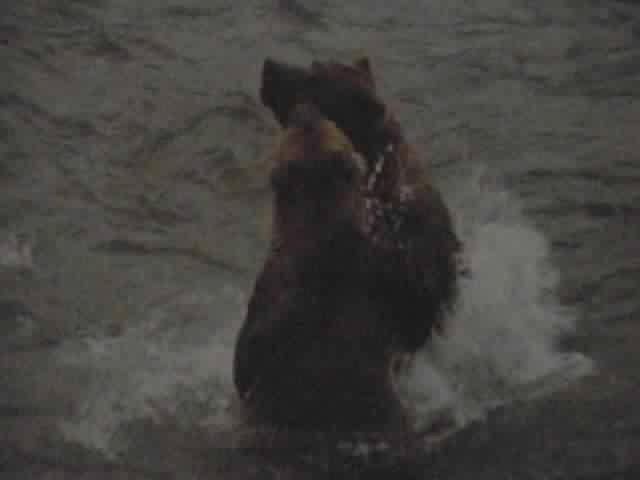 The morning greeted us with rain and cold temperatures...exacly what www.weatherchannel.com said.  The hotel clerk suggested that we go to a 3-D movie, called the Alaska Experience.  (See Above)  Obviously, someone got smart a while back and realized what a gold mine this movie idea was.  Considering that it's only nice a couple months out of the year, this is probably how most people see Alaska.  The movie was awesome, but left both Buddy and I a little motion sick for about 8 hours afterwards. 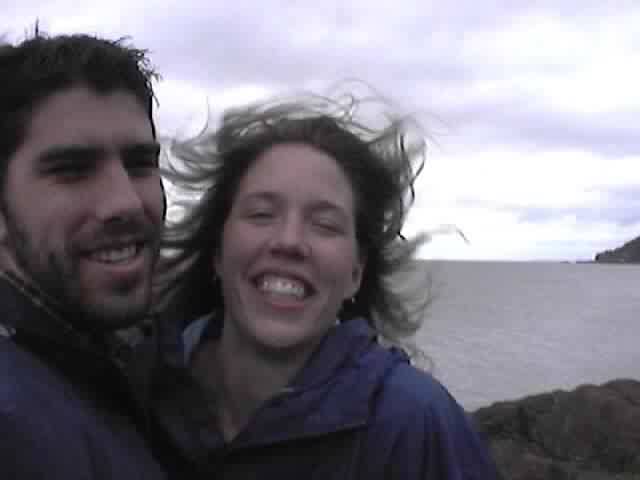 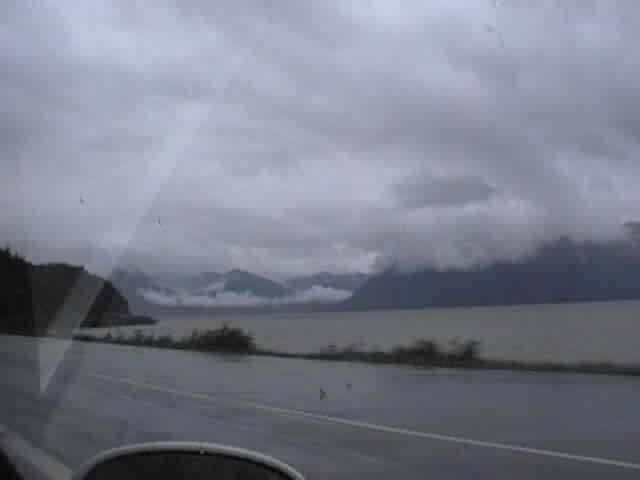 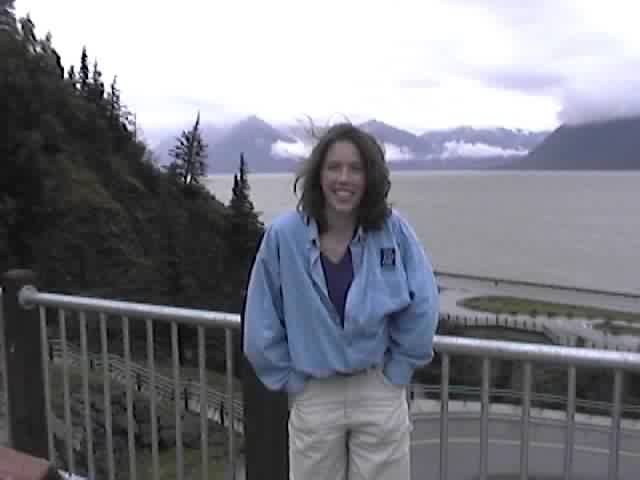 We decided to brave the elements and headed to a couple of places along the Anchorage Shore.  It was indeed beautiful, and would've surely blown us away on a clear, warm day.  (Very bad hair day with the wind factor involved)  Even though it looks like I, Jen, was a trooper, I only got out of the very warm car for a very short hike and photo-ops.  Other than that, I was snug as a bug in our rented white KIA. 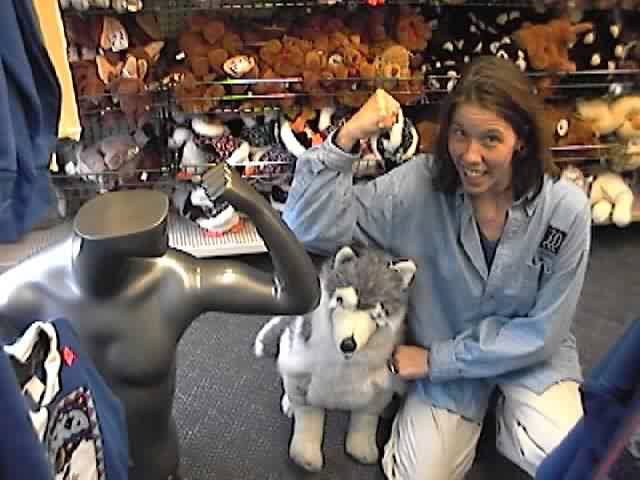 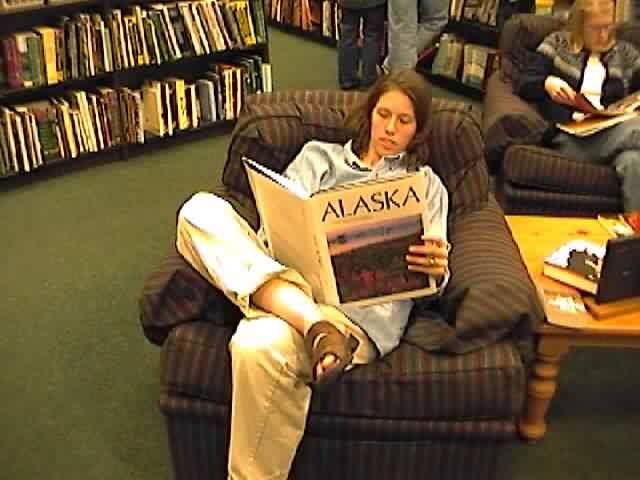 It quickly became apparent that we were going to have to spend most of the day inside.  We did lunch at a Mongolian Bar-B-Que...(so good...our favorite place to eat...Doug, you would love it!!), and headed off shopping for gifts.  I bought my nephew the cutest Alaska Fleece Jacket, but it metamorphisized into a ball of synthetic plastic in "the Fire".  This flexing picture is for all of you who liked the last one so much...I just couldn't pass it up.  We spent a lot of time that day at Barnes & Noble.  I was happy as a clam, sipping Starbucks coffee, and being warm.  (A very good way to see Alaska, for those of you who don't want to travel) 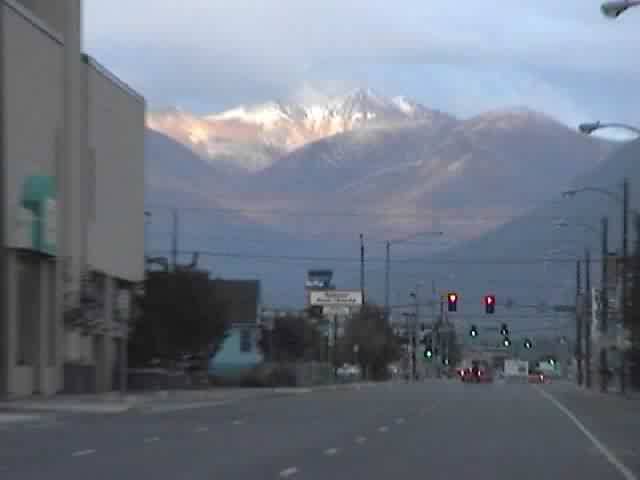 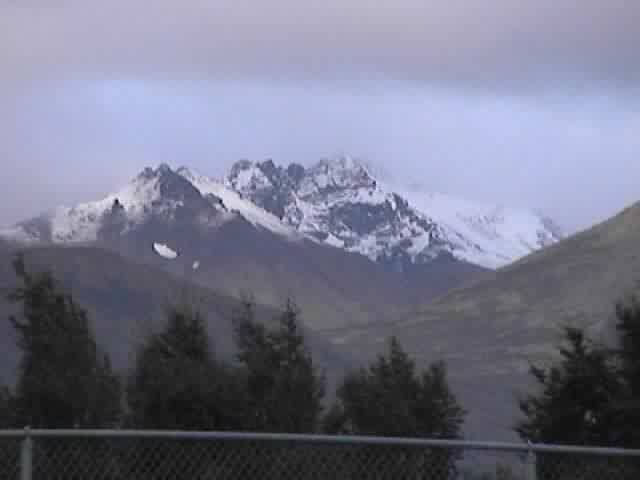 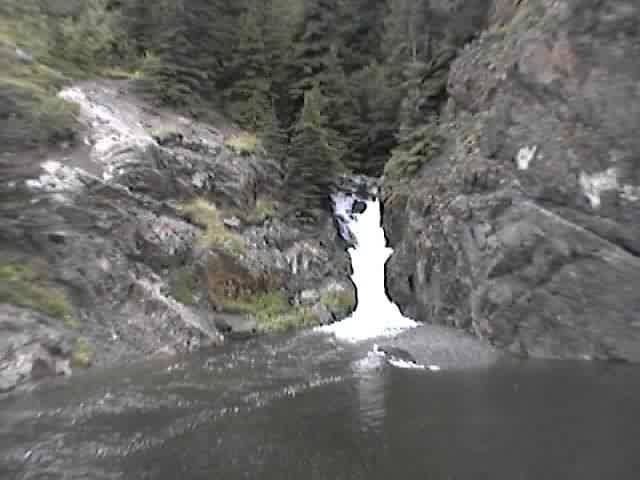 It cleared up as the day went on, and we went to go and see a movie on the Northern Lights. It was so beautiful and peaceful.  One thing that we are learning on this trip is how gracious God is to us, his oft way-ward creatures, in giving us such a beautiful place to live.  It is almost impossible to imagine what heaven will be like.  Our plane didn't leave until close to one a.m., so we went back to Barnes & Noble until 11, and then headed to the airport.