This is Rack's entire 2 period Bible Class except for the girl in the corner who was furiously scribbling out her homework assignment.  Rack asked  me to come and share my story with them so I did along with a few stories from Jeff's past that I am sure were of much more interest to them. 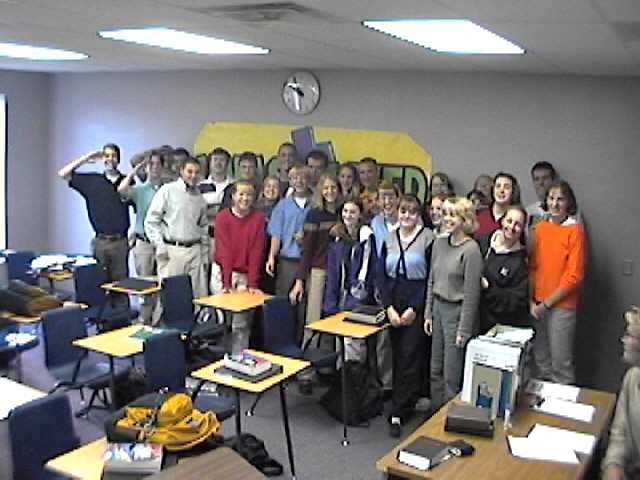 Rack sitting at his desk.  On the right is Harrison, a very likable chap.  I think the girl that sits behind him in class likes him a lot too.  We met Harrison last spring when he came out with Rack to visit Mark Palmer.  Harrison is just learning to drive and unfortunately has already picked up his first ticket.  Slow down, Harrison.  I'd like to see you alive next time I run into you.

Here are a couple of shots of the class.  They were really well behaved and a fun bunch of kids.  After class Jeff became my personal trainer and had me lifting more weights than I ever had since high school swim team. 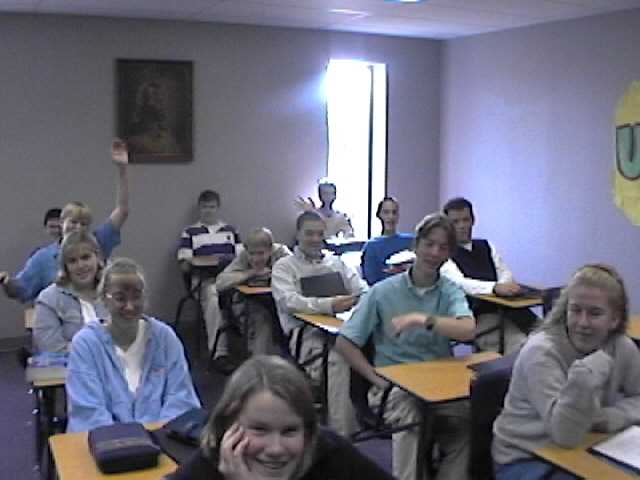 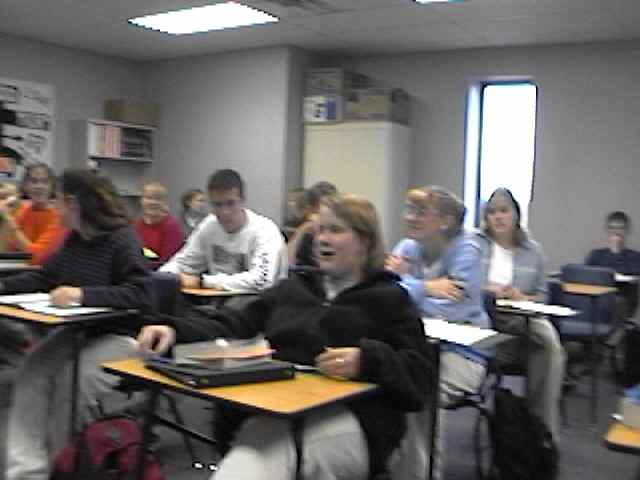 Russ is one of my friends from college as well.  He traveled the same summer with Jeff and I and we also played soccer together for 3 years.  Russ and his wife Shannon (in the white shirt) just had Carson about 6 weeks ago.  Carson came to the "Missionary in the House" Party that Russ and Rack hosted for us and behaved wonderfully. 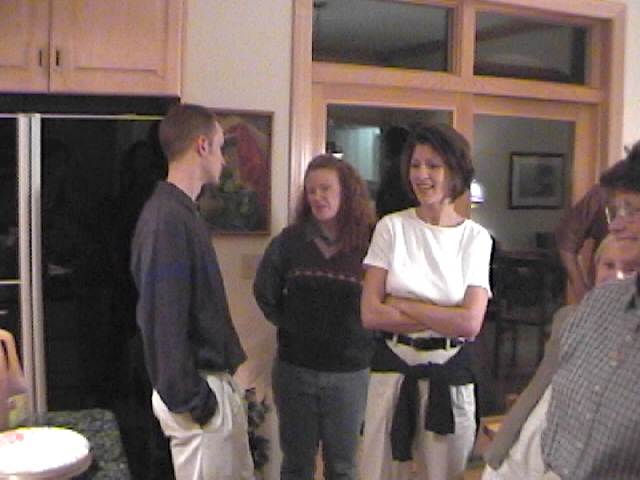 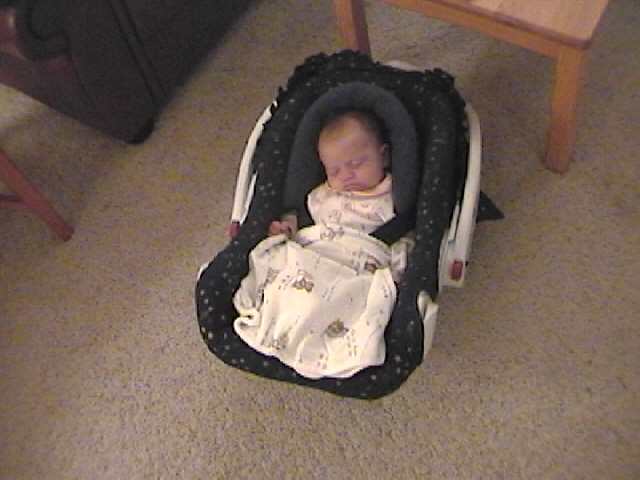 There were quite a few people at the meeting and quite a lot of food as well.  It is always encouraging to hear the response of people as they hear about the ministries of Cadence for the first time.  You can see Rack's parents eating in the picture on the left.

On the left are Jan and Dave Lehman and they graciously opened their home so that we could have the meeting at their house.  Their house was filled with beautiful word work which Jen loved.  One of Dave's hobbies is woodworking and he actually built the staircase that they are in front of.  Jen and Dave actually had a few things in common.  Jen has always thought she would love to be a dentist.  Dave is an orthodontist.  Jen loves to work with wood.  Dave builds staircases and tables for fun.  And they are both perfectionists. 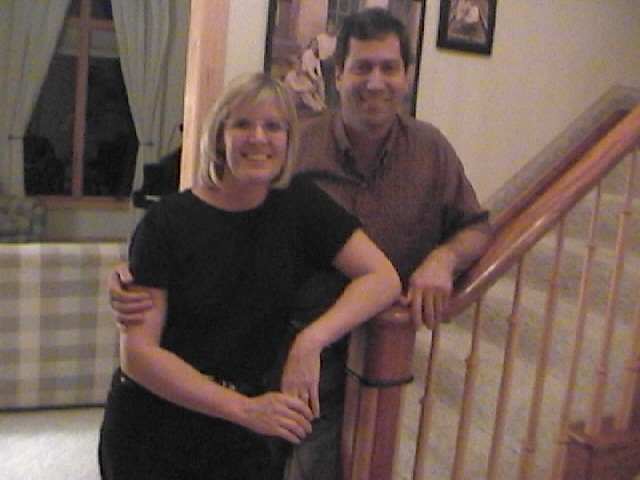 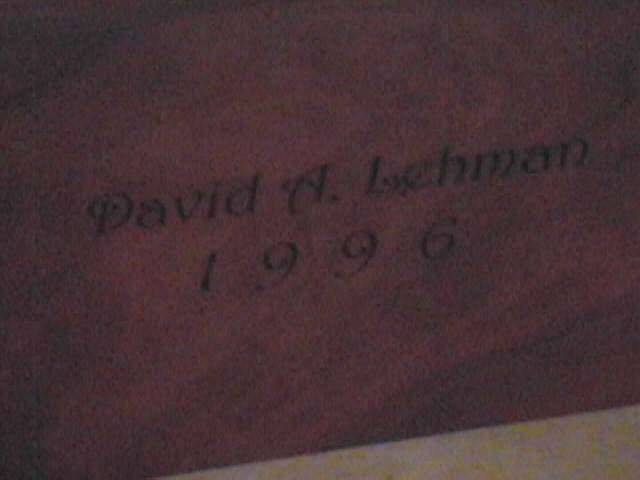 Below are Jeff's grandparents.  I first met them in the Spring of 1994 when Jeff and I along with Jason, Dan (the same one from the Colorado trip this summer) and Adam went to Florida to research our senior trip to the Bahamas.  I don't remember if they adopted us or we adopted them but we have just called them Grandma and Grandpa since then.  They both made it to their 50th states this summer as well.  They spent 81 days on the road to celebrate 50 years of marriage.  52 years ago Grandma was a 13 year old living in California when she and Grandpa fell in love.  The next summer Grandpa asked her mom if he could marry her.  Grandma said not until he had a house of his own.  So they wrote letters every day through that year and Grandpa managed to buy a house.  When he went to California to collect his 15 year old bride her mom said that she was too young so they eloped and got married anyway and are still in love with each other. 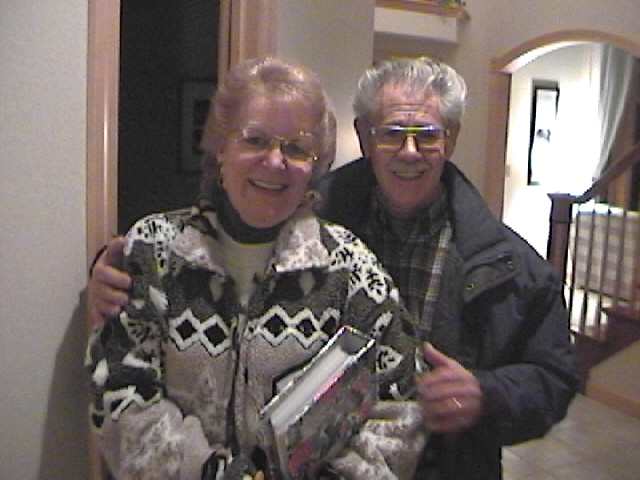 Previous    The Journey   Next